If you want a cheap flight, when you book the trip is a big part of getting the deal. But with so much conflicting advice out there, it’s hard to know which is correct.

We’ll set you straight, but before we do, there’s a few things you need to know.

When to Book a Flight

Before an airline can price a flight, it all starts with gathering data. Details about the flight such as distance, destination, competition and time of year are just the beginning.

The price of your airfare also consists of basic fixed costs of flights. These can include base fare, taxes & airport fees, fuel surcharge, service fee to issue, seat selection, baggage and food.

There are a number of details that airlines also look at that have influence over the price. Since there are several variables, airline pricing is dynamic and changes frequently, and can even be multiple times a day.

On average, we found based on the studies available that about 3 months in advance for domestic and 5 months in advanced for international is a good reference, but advise to begin looking even sooner. 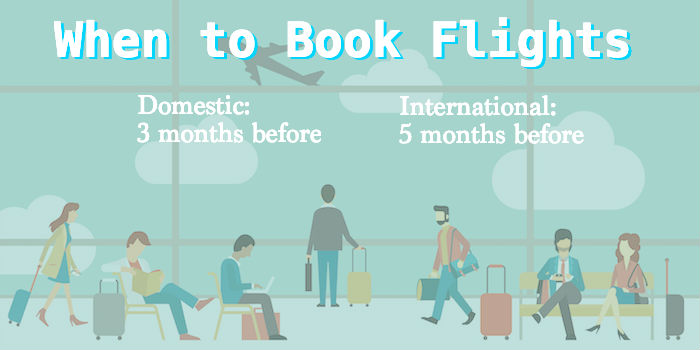 The availability and demand of seats for a particular flight. This info, in combination with how far in advance to departure date is one of the variables often looked at. Prices are set lower for future departures to book flights, and when they meet certain thresholds or percentages, rates go up. That isn’t to say the airfare won’t drop again, they often do as an attempt to book even more seats, but it’s impossible to known exactly when and you just have to monitor prices for finding cheap flights.

There’s certain times of year where airlines know people are travelling, and often leave flights at full fare or even more if the demand is high. Think of times like Christmas, Thanksgiving and when school vacations occur. If you book far in advance, you might get an additional savings, but since airlines know they’ll likely book an entire flight for most destinations the deals are less frequent for these times.

Days of the Week

You’ve probably heard or read there are certain times or days of the week that are best to book a flight for finding cheaper airfares. While this is partially true, it’s not always the case. On average, flights on a Friday tend to be higher since many would like to leave for a trip right before the weekend. Also, most business travellers tend to fly on a Monday morning which can also influence fares.

From the many studies on when to book a flight, many agree that Tuesday to Thursday tend to be the best days. But once again, due to dynamic pricing, this doesn’t guarantee the best airfares. It might have be the case at one time, but it’s not necessarily now.

Roundtrip versus One Way Flights

Every so often you’ll find cheaper flights if you book two one way tickets instead of a roundtrip. Since airlines are always adjusting and tweaking rates, and it only takes a minute to check, compare the fare.

For domestic flights, the window of opportunity is usually 30 to 90 days (1-3 months) where international flights is often 3 to 6 months.

Some factors or restriction that can affect what you pay can include the 14-day advance purchase restriction and being required to stay a Saturday night. These usually rule out most business travellers.

It doesn’t end there either. Some of the other requirements can include:

Departure day restrictions: requiring you to fly on the least popular days, which are typically Tuesday, Wednesday or Saturday.

Flight time restrictions: requiring you to fly at unpopular times, such as dawn, during meal times or overnight flights.

Blackouts dates: airlines often restrict sales from the most popular days of the year to fly

Airlines collect a lot of data on their passengers, from when, where and why their booking, to a whole lot more. This allows them to manipulate their prices to maximize profits. Despite what many believe, airlines don’t have what you would call huge margins per passenger. The fixed costs determine the base expense, and things like competitor rates and other factors determine what they can charge, or what passengers might be willing to pay. So the more tickets an airline can sell, and fill the flight, increases revenues. By monitoring passenger behaviours, trends, competitors and booking patterns to adjust prices accordingly, and identify how, when and why someone books a plane ticket.

Airlines collect data primarily through registered website users, loyalty programs, and browser cookies to identify trends and other data for analysis. This allows them to learn about details such as age, location, travel interests and habits, along with other insights. This data allows airlines and OTA’s to build a profile and get to know you a bit as a traveller, and ticket buying habits.

Destinations are also a factor, where the origin and destination of certain flights are more likely to be leisure travel, and some is business travel. Since most business travellers book flights last minute, a flight closer to the departure date tends to be higher. But for those that book a flight a few months in advance, the odds of finding an amazing deal increase significantly.

But what about the low cost airlines like Southwest and Jetblue in the US, Swoop in Canada, easyJet, Ryanair, WOWair in Europe, or the dozens of other in Asia and beyond? These airlines work on a different model, focusing on shorter and more popular routes, allowing them fully book flights most of the time.

Since most airline systems are automated for dynamic pricing, there are certain travel hacks that travellers will realize when looking for cheap flights. At the same time, if you’re looking for deals, you should also familiarize yourself with the various travel myths or you might miss out.

Naturally, the seat or travel class such as economy, premium economy, business and first class will also be a factor in what you pay. With economy (AKA coach or “cattle class” ) you’re getting the basics and paying the least. These seats tend to be the narrowest and offer the least leg room. Some airlines include free snacks and inflight entertainment, but it isn’t a sure thing. Premium economy provides more comfy seats, more legroom, and sometimes other perks like better food and/or baggage allowance. With business and first class, things only get better, but it comes at a price. If you’re fortunate to get an upgrade, the experience will finally answer your curiosity.

So if you’re looking for cheap flights, the most important things to keep in mind is be looking well in advance, know the typical airfare rate so you can spot a deal, and pounce on it when you see it. Most deals only last a day or two, and many will disappear in hours. One last tip is to look and book at times most wouldn’t want to, such as dawn or overnight. But the main thing is it all comes down to flexibility, timing, and knowing when you’ve found a deal.