For those looking to save on flights, hidden city ticketing (also known as skip lagging , throwaway ticketing, or point-beyond ticketing) is a sneaky way to find cheap flights which can help save, but is it worth it?

A controversial topic in travel, with some airlines starting to crack down on it, we took a closer look at how it works.

It isn’t rocket science. If a direct flight between two cities were $500, but there’s a flight with a stopover at your target destination for significantly less, many might consider the option of hopping off at the stopover to save.

That’s hidden city ticketing. You simply get off the flight at the connecting city.

While it all sounds like a great way to save and find more cheap flights, we looked at both the pros and cons to consider if you’re thinking to use hidden city ticketing for travel. The pros are obvious, you can save on a flight. But it’s the cons that we explored deeper.

The airlines are not a fan of hidden ticketing, and with good reason, it can reduce revenues.

The hidden ticket trick also affects consumers. If a large number of people were to book a flight from L.A. to New York, with a stopover in Chicago, anyone trying to book from Chicago to New York would see very few if any seats available, even if the last leg of the flight is almost empty. The airlines computer systems will notice the New York-Chicago part of the trip being almost sold out and increase the airfares, since prices go up as seats become scarce.

When airlines lose revenue as a result of hidden-city passengers and travellers, their need to raise fares for recovering that lost revenue can affect everyone, and sometimes this can affect the price of all flights, no matter the destination.

This can also raise the question about whether it deprives other travellers in their ability to get seats on flights, and can even result in them paying more, along with ethics.

Additionally, there are times when airlines will hold flights, but more likely when there’s several  passengers  connecting for a flight than a single passenger. If most of those passengers were using the hidden-city trick, this can needlessly create scheduling issues, delays and inconveniences for the passengers on the flight waiting for any no-shows.

A downside of using hidden-city ticketing is you can’t check your bags, and need to get by with whatever you can take as a carry on. But what if there’s no longer room in the overhead bins and a flight attendant decides to gate-check your bag? It’s off to the final destination of that trip for your luggage and you’ll be completely out of luck.

Here’s a direct flight from L.A. to Chicago;

With many Online Travel Agent (OTA) booking sites, you can set parameters like whether you want direct, how many stopovers, what connecting cities you prefer, airlines, and other options. 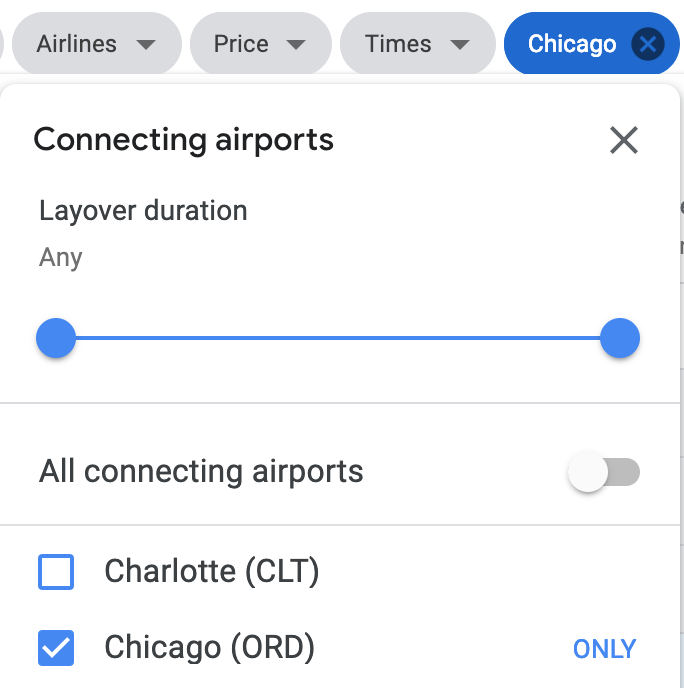 Using the hidden-city ticketing, we found a same day flight from L.A. to New York with a stop in Chicago for less.

Clearly there’s a substantial savings to be found, but again, at what cost?

There are times when hidden-city tickets can backfire as well. Like when a stopover is changed and the L.A. to New York flight reroutes the stopover in Chicago to another city like Boston or Denver. While it doesn’t occur often, it isn’t predictable and can happen, resulting in you missing your intended destination.

Not every airline prohibits the practice. It’s not illegal, but if you were caught, hidden city ticketing penalties mean you could face a number of consequences from having your frequent-flier miles revoked to penalties and/or elite status, possibly forcing you to full price of the trip, and refusing service or bumping you from future flights. It’s all in the contract.

In the airlines ‘contract of carriage’ (all the fine print when you buy a ticket) allows them to call the shots and deal with the matter however they see fit, and hidden-city tickets are in violation of this agreement. If you do indulge in the practice, you’re best advised to book your flights each as one trips at a time (not return) because the airline could cancel the second half of your roundtrip flight if they became wise to your intent.

Airlines are starting to clamp down, and a passenger was brought to court seeking compensation (over $2,000) for skip lagging an international flight. The suit was initially dismissed, but the airline is appealing the decision. At present, it’s believed that airlines do not actively search for passengers using hidden-city ticketing and getting off before their ticketed destination. But that could change at any time, and as this becomes more popular, it increasingly becomes an issue for the airlines. Further details of United’s stance can be see in their “Prohibited Practices” outlined in Rule 6 of their ‘Contract of Carriage’.

Is it worth the risk? It’s entirely up to you.

But most travel experts now recommend that you’re better off looking for cheap flight deals and error fares. Is it worth a lifetime ban from an airline? It may not have happened yet, but it could be going in that direction.